The above map depicts the arrangement of linguistic language groups in North America believed to be present in 1492 when Christopher Columbus's first voyage accidentally landed upon an area of the world that was decidedly not China (they were looking for a sea route to the Far East from Western Europe). The changes that began in that year altered the map of North America in ways that had never happened before.

To be fair, changes in human boundaries and political organization have always been in a state of flux for North America, as they were in any other part of the world. Empires rose and fell, ethnic groups dispersed and concentrated, and new systems of organization were developed and tested with more or less the same regularity as the rest of humankind. However, the scale and speed of these changes intensified, for a time, when Europeans began to settle the Americas. This happened for many reasons that this blog will touch on from time to time, but the primary reason appears to be disease. Wide-ranging, epic diseases may have contributed more to our modern map arrangement than most other factors. This accelerated circumstance, combined with the general lack of records in pre-Columbian North America (and there were records), creates blank spots on any map we create of pre-Columbian America. Thus, any map claiming to represent North America as it was at 1491 or earlier is both incomplete and a bit suspect.


Why 1491? Why not 1099 or 750 or 10,000 BCE? And why were the coming of Europeans coupled with so much change? As Charles C. Mann has recently illustrated, North America was a very different place in 1491 than it is today. This particular year was the eve before European commercial interest was initiated by the Spanish-sponsored Columbian Voyages and subsequent Spanish Global Empire. This was also the year before a massive series of European-delivered epidemics wiped out most of human life in the Americas (most specifically smallpox). This loss of life was arguably the largest in human history and greatly altered the political and ethnic boundaries of North America. Here is an excerpt from Charles C. Mann's book describing some of the issue, which is not without controversy:

Our overall picture of 1491 North America, whatever it actually was, was monumentally changed in ways we can scarcely imagine today. Further, the record keeping styles the Europeans brought with them as they first ventured into the continent provides a wealth of ethnographic and political data that was previously unavailable, despite some excellent records kept by the indigenous Americans themselves. Thus, the year 1491 symbolizes the pre-Columbian world of North America that is largely lost to us now. However, through examining the historical record, both the indigenous and the European, as well as the archaeological, anthropological, linguistic, and scientific research that are available to us, we can partially recreate a map of who was where in North America when the Europeans appeared. This is the holy grail of North American maps and being able to synthesize an accurate one will go a long way in articulating the changes we have undergone as North Americans.

Attempts to build this map have been difficult, long-winded and have yielded impartial or contentious results. Although it may seem to the contrary, mapping an entire continent is no simple enterprise, even in this satellite age. Nevertheless, this blog will review every instance of a mapping of North America in the pre-Columbian period (in addition to this blog's main charter), in an attempt to realize this goal.

For example, the map at the very top of this post is the Voegelin & Voegelin (1965) linguistic classification of American Languages map. It is a linguistic mapping attempt from a conference of linguists back in 1964. Some 30 leading linguists of the day met and conspired to create this beautiful map in order to make sense of the 1491 world. Nevermind that this map does not reflect political boundaries per se, (even though languages sometimes coincide with a national boundary) or that some of the classifications have been discarded since the 1960s (see American Indian Languages: Historical Linguistics of Native America by Lyle Campbell page 79 to see what has changed). This map is an example of what this Holy Grail can look like with the right combination of data and research. When this map is created, you will see it here. In the meantime, we will discuss what clues we can find. 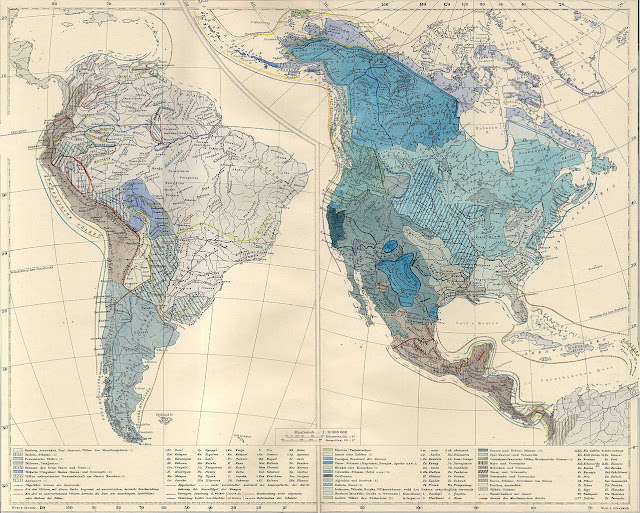 Posted by neoteotihuacan at 9:12 PM

Looking for Something in here?